Digital Abundance, and the Second Half of the Chessboard

We live in a time where the rate of change in digital and cloud technology is exponential. The word “exponential” is used a lot, often without rigour, but in this case the statement reflects reality closely, and the implications are perhaps staggering. We are already seeing – and often taking for granted – a rate of innovation greater than any other period in digital history.

Fable of the Chess Board

To understand the extraordinary power of exponential growth, Let’s start with the fable of placing rice (sometimes wheat) on each square of a chessboard, starting with one grain on square one, two grains on square two, four grains on square three and so on – doubling each time. The well-known question is: how many grains of rice would be on the chessboard at the finish? The story is often told in the form of a servant speaking with the Chinese emperor, but the tale is linked more clearly to the writings of Islamic scholars around the 10th century, or sometimes to the invention of chess itself in India.

The final square alone would end up with 2 raised to the power of 63. That is a very large number indeed, and there would be enough rice on the board that placed end-to-end the grains would span the gap to the nearest star, Alpha Centauri and back again. 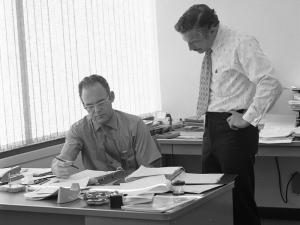 Gordon Moore working at Intel in 1970

The one real place in human endeavour where this type of process exists is IT. It is (of course) enshrined in Gordon Moore’s “law”, where in 1965 he predicted a doubling every one to two years in the number of components per integrated circuit.

Moore’s Law is now a cliché, mentioned in articles and on stages an untold numbers of times. It is not even a law in the normal sense, but a remarkably astute observation. But as a description of actual progress it is real, and remains real.  It also carries through to memory capacity, disk capacity, the number of pixels in digital cameras, and much more. The drum beat of progress is remarkable, sustained, even relentless. 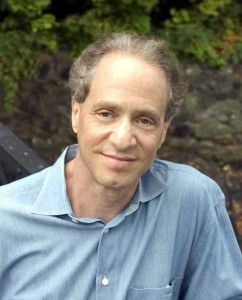 Ray Kurzweil and the Second Half of the Chessboard

In 2001, Ray Kurzweil – computer scientist, inventor and futurist – wrote a seminal essay about the rate of change in digital tech that contained the following observations about the rice and chess parable, to illuminate the future power of the Moore’s law process.

It should be pointed out that as the emperor and the inventor went through the first half of the chess board, things were fairly uneventful. The inventor was given spoonfuls of rice, then bowls of rice, then barrels. By the end of the first half of the chess board, the inventor had accumulated one large field’s worth (4 billion grains), and the emperor did start to take notice. It was as they progressed through the second half of the chessboard that the situation quickly deteriorated …. One version of the story has the emperor going bankrupt as the 63 doublings ultimately totalled 18 million trillion grains of rice. At ten grains of rice per square inch, this requires rice fields covering twice the surface area of the Earth, oceans included. Another version of the story has the inventor losing his head.

Ray Kurzweil from “The Law of Accelerating Returns”

In other words, it is in the later phases of exponential growth that the effects become extraordinary, and beyond all common-sense models. Kurzweil uses this as part of building the case for the singularity – a predicted epoch of miraculous tech-driven change – that sits at the ragged edge of futurist thinking.

Erik Bryonjolfsson and Andrew McAfee of MIT develop the chessboard metaphor further in their excellent book “The Second Machine Age”.

They take a start point in 1958. The late ’50s were a remarkable and forgotten period of progress in tech, where many foundation concepts were created. 1958 also marked the moment when the first use of the term Information technology was made in the Harvard Business Journal.

Assuming a doubling of IT power every 18 months, we entered the second half of the chessboard in 2006 – a year that saw the launch of twitter, YouTube and Amazon Web Services in a form we would understand today.

The point that Bryonjolfsson and Andrew McAfee are making is this: remarkable capacity is now available, and continuously increasing, for innovators, inventors and entrepreneurs. Such abundance of resources allows us to have driverless car technology, smart phones with the capacity of high end PCs of the past, and games consoles with the capacity of former supercomputers. Digital abundance has also led to the first usable voice-based agents such as Siri, vast and responsive social networks, and robots that begin to mechanically move and act in the world like humans or animals. We have data, and potential insight, at scales that stretch our ability to describe in the current metric system. Social Commerce enterprises, like uber and Airbnb, have connected legions of customers and citizen suppliers on a scale that is breathtaking. We have arrived in the foothills of the future sooner than we were perhaps expecting.

For enterprises, this richness of compute and storage power allows the redundancies that make large-scale cloud computing not only feasible, but competitively essential and inevitable.  For most purposes, it is already inherently cheaper, more (potentially) agile and secure. The new technologies also facilitate new types of business model, new sources of insight on a gigantic scale and new demands from their end clients.  Immediacy in business matters more than ever. As a result, Enterprise IT has embarked on a long period of transformation and change – maybe a decade of marvels and dark dangers. Any organisation now needs to think more about tech opportunity and invention, than optimisation of the server estate, or cost per development hour.

Whether we will create true AI in the next decade, or next century, or ever remains an unanswerable question. The current rush to digital will prove to be part-bubble driven by over enthusiasm.  There will be broken promises, and conventional challenges around service and costs. Legacy rarely dies, but grows larger.

But what is clear is that the opportunity to invent and innovate grows ever more profound as we move into the next great phase of digital history. It’s time for imagination and for all technology practitioners to look forward.

Keith Haviland is a business and digital technology leader, with a special focus on how to combine big vision and practical execution at the very largest scale, and how new technologies will reshape tech services. He is a Former Partner and Global Senior Managing Director at Accenture, and founder of Accenture’s Global Delivery Network.