Is the medium now more important than the message?

The second instalment of this article looks at the rise of social media…it focuses on some outstanding digital campaigns… it studies the rise of niche specialists and their impact on transmedia marketing… and it questions whether advertising is abandoning some of its vital creative skills… is it too arrogant for its own good?
Companies no longer control their brands.

Gone are the days when companies could impose their values on a passive, compliant market. Today the customer calls the shots…
The rise of social media has given consumers the power to make or break brand reputations. Some Brand Managers fear that the inmates have now taken over the asylum. And, in truth, it sometimes feels like you are tap dancing in quick sand. The ground keeps shifting because customer attitudes are granular, fickle and emotional. One bad experience… one blog fired in anger… and decades of brand development are shredded.

When Dave Carroll, a passenger on a United Airlines’ (UA) flight, had his precious Taylor guitar destroyed by baggage handlers, in front of his very eyes, the mishap turned into a corporate disaster. When UA repeatedly declined to reimburse Carroll for the damage, the musician responded by writing a song that destroyed the airline’s brand and customer service credibility:

As the song went viral, UA’s shares went into nosedive:

‘Within four days of the song going online, the gathering thunderclouds of bad PR caused United Airlines’ stock price to suffer a mid-flight stall, and it plunged by 10 per cent, costing shareholders $180 million. Which, incidentally, would have bought Carroll more than 51,000 replacement guitars.” (The Times online)

By contrast, another airline was having a rather different day…

A Virgin Atlantic flight had just embarked its passengers and was preparing to take-off when the captain announced that airport control had delayed the flight for 30 minutes. Now any hold-up is frustrating but, for one passenger, the aggravation was about to ratchet skywards.

On opening his laptop to complete some urgent work, he discovered that his overhead light wasn’t operating. This wrecked his plan to turn the long night flight to productive advantage.

To vent his anger, the passenger did what millions of frustrated customers do… he tweeted. He filed a very public complaint. Family, friends, colleagues and acquaintances received a graphic account of Virgin’s failures. Unbeknown to him, though, other eyeballs were also tracking the unfolding drama…

Five minutes after the tweet, a senior Virgin engineer boarded the aircraft. After personally apologising to the astonished passenger, he removed the control panel above the seat, replaced the faulty unit, tested the system and then quietly exited the aircraft.

As a practical demonstration of customer service, this must rank among the best. It turned a genuine brand threat into a global PR success. More importantly, it demonstrates what can be achieved when you are serious about social media… when you put a high priority on customer care… and when you empower people to make a decisive difference.

However, the biggest digital game-changer was actually a game. A very clever game conceived by one of the most consistently creative forces in marketing: Audi. Check it out…

Now over 10 years old, which in technology terms makes it almost Jurassic, ‘The Art of the Heist’ set new standards in transmedia marketing and story-telling. To my mind, it is still the touchstone campaign.

The idea was beguiling and bang on the money – it perfectly targeted the gaming, tech-savvy, A3 consumer market. It also worked seamlessly on and off line. The care and creative craftsmanship that were invested in this concept are reflected in outstanding production values right across the board.

There’s a lot of other good work coming out of the digital marketing arena. Amazon, BA, Dacia, Pot Noodle, McDonald’s, Red Bull, Dyson, Mini, Orange and KLM are just some of the notable campaigns that spring to mind. But ‘Heist’ commands ‘top respect’ because it not only broke new ground but it did so on a transmedia platform. That calls for courage, craft and enormous creative confidence.

But it’s a confidence that’s in short supply…

The rise of digital marketing has fostered a new industry of niche experts. Specialising in technology-driven solutions, they operate solely in the digital domain. They are one-trick ponies.

Without joined-up thinking, marketing will become increasingly fragmented – splintered between multiple service companies that jealously guard their dis-connected territories. And if this happens, then many of the integrated, transmedia, global branding skills that agencies so carefully developed in the 70s, 80s and 90s will disappear. Indeed, this may well be happening right now…

I have a growing concern that words in advertising have become an irritating irrelevance. Robin Wight – president of The Engine Group and co-founder of advertising agency WCRS – made this very point in a ‘Campaign’ article soon after the millennium:

“Go back and review those historic ads for Stella Artois, for the Army, for Uniroyal, for Selfridges, for the Health Education Council, for Parker Pens et al, and see if you don’t agree that they are better than their modern successors.

“And modern television, for all its brilliant simplicity, its post-modern irony and its powerful use of imagery still lacks both the dialogue and the demonstration that the skills of a copywriter brought to the process in earlier eras.”
Campaign 7th March 2003.

I agree with these sentiments. Yes, a picture can be worth a thousand words. But would Saatchi’s food poster have the same impact without its hard, uncompromising copy? 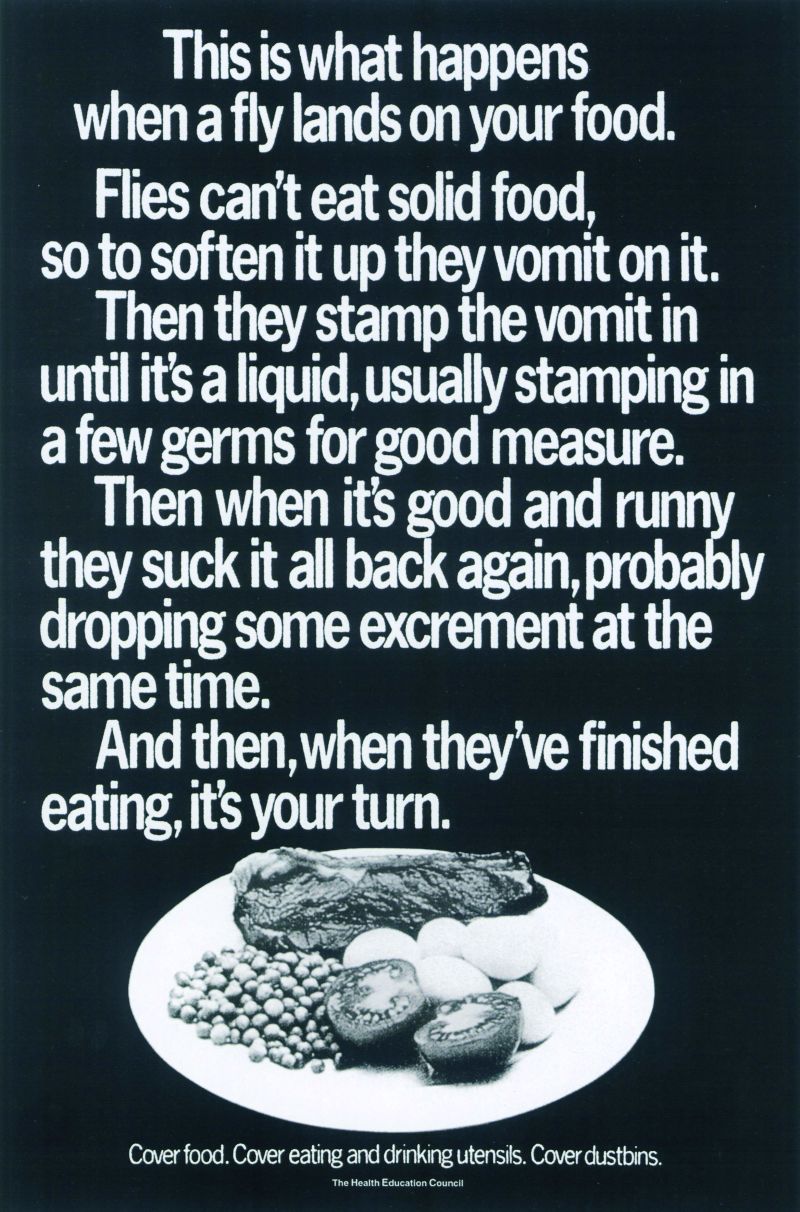 And would VW’s commercial have established the brand’s rugged, reliable credentials without these 15 beautifully crafted words: Ever wondered how the snowplough driver drives to the snowplough? This one drives a Volkswagen.

By abandoning words, we are also rejecting one of advertising’s core creative tools. Is this wise? More to the point, is it dangerously apparent? Do today’s commercials really achieve as much as they could – and should? Let’s look at two of them…

‘As British drinkers continue their inexorable move away from real ale and local pubs and show a relentless thirst for ice-cold beer, new tastes and drinking at all hours of the day and night in trendy bars and clubs, it is premium lagers that look set to reap the benefits.’
Extract from ‘Campaign’ article, 2004

Traditional beers – and particularly dark ales and stouts – have been the casualties of today’s premium lager boom. Their cloth cap and whippet image simply doesn’t fit with the new thirst for ice-cold, honey-coloured, lagers. And Guinness – bible black and slow to pour – is about as far removed from this trendy product profile as it’s possible to be.

In 1999, the Irish brewer’s response was to turn patience – a perceived negative – into a totally unexpected positive: ‘good things come to those who…’

Surfing – an extreme sport with a popularity that spans all age groups and demographics – became the inspired visual metaphor. The surfer’s long wait to catch the perfect wave mirrors the Guinness drinker’s patient but expectant vigil.

And when that wave finally builds, it becomes a triumph of special effects. Spumes of creamy spray top the curling wall of water and then morph into graceful white stallions. The Guinness analogy is as stunning as the graphics. The surfers ride the tube, tumble into darkness and unite in shared exhilaration just as the drinker savours his first taste in a silent moment of pleasure. That silence lasts for eleven seconds before it is broken by the line:

Cheers! This is a sublime and superbly crafted idea. An image packed full of powerful, persuasive imagery. And I am not the only person who thinks this way. The Guinness ‘Surfer’ was voted the No.1 commercial in a poll of the nation’s 50 Favourite Advertisements.

Here’s to waiting – good things come to those who watch:

This commercial has also been widely praised by thousands of people. One particularly enthusiastic viewer even tweeted: “Whoever thought of this… you are my advert hero.”

In truth, there’s no denying that a bloke in hotpants and high heels twerking across my TV screen is an arresting image. But, to me, this commercial is two letters short of possible greatness. When advertising trades ‘image’ for ‘imagery’, then you begin to create something rather special.

Guinness works because the connection between image and message is there from the start. You get it. You feel involved. You identify with the idea of waiting for life’s pleasures.

The MoneySupermarket commercial just doesn’t connect with me in the same way. Yes, it’s fun and funny in its odd OTT way – but it doesn’t make me want to ‘buy’ the product. In fact, it doesn’t even tell me about the product, let alone demonstrate its distinctions. And the minimalist script – “He feels epic!” and “You’re so MoneySupermarket” – doesn’t exactly enlighten me either.

But might this be deliberate? Perhaps MoneySupermarket is purposely aiming for a young, radical adult audience. If so, this commercial could be an ‘outrageous’ solution to a courageous niche strategy.

However, I rather suspect that MoneySupermarket has bigger ambitions. If so, they would love to market their comparison services to mature (45 – 80+) adults who might well struggle with this commercial. I fear that a lot of older people may be perplexed, confused and perhaps even annoyed that their desire for financial guidance is treated so frivolously.

But is there a much simpler solution? There is another entirely different school of thought that believes we should forget about demonstrating, informing and promoting product distinctions. These advocates maintain that advertising is nothing more than an attention-grabbing platform for keeping a brand front-of-mind.

A growing number of people believe this and they are perfectly entitled to their opinion. But let me leave you with this thought. The last time people hurled the rule book out of the window was in the late 90s. Accepted wisdom and proven business practices were rejected in the pursuit of a bold new paradigm. It was called the dotcom boom. 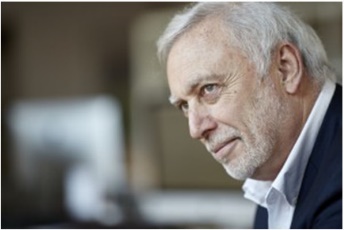 Ian Spencer is a founding partner of Clustre
The Innovation Brokers

And that sort of brings me full circle. We’ve come a long way since the 60s. We’ve swapped the inaccuracy of ‘Musketoon marketing’ for the sniper precision of CRM, Neuromarketing and Artificial Intelligence. We know our customers in intimate detail and we can reach them in a uniquely personal way. But for all the cleverness of digital marketing there remains one inescapable truth.

If you look again at my earlier examples of the food hygiene poster, the Economist campaign, the work of Roy Brooks, the Araldite poster, the Art of the Heist, the Guinness ‘Surfer’ and dozens more outstanding examples of creativity, there is a consistent lesson to be drawn. Advertising – especially memorable, brand-enhancing advertising – is always the product of effort, fastidious care, enormous craft and infinite passion.

The medium will always be the servant of the message… all good advertising begins and ends with a great idea.

I hope you have enjoyed this article. More importantly, I hope it has inspired you to look at your own marketing and to question whether it’s delivering sufficient value. Are you really optimising performance? Are there areas for subtle or even serious improvement?

These business-critical questions are very challenging for most companies to answer. They live too close to the issues to be professionally objective. That is why Clustre now offers technology companies a free Marketing Audit service. It looks into every aspect of a company’s marketing activity and provides management with a confidential and comprehensive assessment.

This audit service is genuinely free – so you have nothing to lose and everything to learn. Click here.