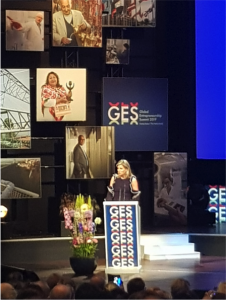 I was delighted to have been invited to attend this prestigious, invite-only event run by the US Government. It runs once a year and visits a different country around the globe each year. This year it was the turn of the government of Holland to co-host this event in conjunction with the US government

The summit typically includes a wide range of workshops, panels, ignite talks, pitch competitions, mentoring, and networking sessions aimed to give participants tailored opportunities to gain skill and relationships that will help their ventures grow. There are also demonstration areas and experiential learning exhibitions to create opportunities for participants to connect with industry experts.

This event enjoys very high-level support from both Government and royalty. It was launched on the evening of June 3rdat a reception attended by high-level dignitaries. Opening speeches were given by the mayor of The Hague as well as the Dutch Prime Minister and the US Secretary of State (who then flew to England to attend the state dinner with our Queen and President Trump). And, if that wasn’t impressive enough, the conference itself was opened by no less than the Queen of The Netherlands (see above picture) who, believe it or not, spoke about micro-finance! Trump that 😉

Two thousand people attended the event from over 130 countries.

What follows is my summary of the sessions that I attended. There were multiple streams at any one point in time so my write-up will not reflect all that took place.

2 out of 3 people will live in cities before too long leading to massive challenges for people living in those cities and the people responsible to ensure their smooth running. We all know how congested cities have become and how much strain has been placed on vital services such as waste removal. There is also a move towards local sourcing so how can this be best accommodated?

Subsequent discussion on this subject covered the following points:

This next session was led by no less than the chairman of Korean Telecom, who gave a mighty powerful presentation on 5G:

This was a plenary session and looked at the state of play of autonomous mobility:

This session was led by the Global CFO of Nasa who has 2300 people work for him! Nasa is on a mission (pardon the pun) having been given the go ahead to put people on the moon again by 2024, for the purpose of determining whether they can produce materials on the moon that would then allow them to power missions to Mars and back. Nasa will spend approx. $21bn in achieving this mission with 85% of this money being spent with suppliers. As part of this, Nasa has established a lab (iTech) that is looking for ways in which start-ups and scale-ups can contribute to, and benefit from, this mission.

Funnily enough, we put a man on the moon before we designed wheels for luggage!

As part of this session we also heard about:

This is a just a brief write-up of a session that did help start-ups meet with corporates and investors.

Firstly, we had a senior executive of Bird (the scooter company I mentioned earlier) talk about her company journey, along with their main investor. The most interesting question she was asked was “why did you launch in San Francisco, a town with so many steep hills that your scooters weren’t able to go up them (going down was not a problem 😉)?”. Apparently, they now have a more powerful scooter that can (as well as a two-seater). The main point the investor made was that after attracting serious money you can’t afford to miss your forecasts, even once!

Secondly, we had the heads of innovation for Ericsson, Unilever Foundry and Google Labs speak. It was refreshing (encouraging) to hear the guy from Ericsson talk about the importance of solving tricky business problems and focussing on these, rather than the underlying solutions. All speakers also spoke about the need to gather diverse inputs and look beyond their normal domains for solutions but surprisingly, none of them placed any emphasis on drawing their customers into solution design. I challenged them on this but I am not sure they really got the point. Sadly, this seems to be the case with most large corporates I speak with. It really staggers me!