Have we invented anything BIG recently? 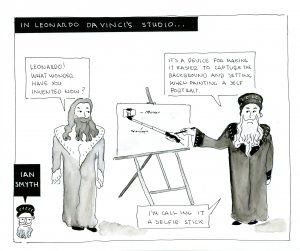 What prompted me to ask this question? Two things really. Firstly, the IET in it’s June magazine ran a tribute to Leonardo da Vinci, who died 500 years ago this month. As well as being an outstanding painter Leonardo invented, amongst other things, the aeroplane, armoured tank, ball bearings, the helicopter, the self-propelled cart, canal lock gates and the swing bridge, all before any of them were possible! Remarkable. Secondly, I saw this picture on LinkedIn: 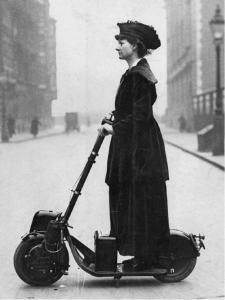 As you might guess, this picture was taken quite a while ago; 1916 to be precise. Until seeing this picture I didn’t realise that the increasing number of motorised scooters we are seeing on the road were invented so long ago.

Then I started thinking, what have I seen recently that was invented recently? do you know what, I couldn’t think of a single thing!

The computer, that is so much of our everyday life, was invented in 1822 by Charles Babbage (an Englishman I am proud to say). Had electricity been invented around that time too, his invention would have had an even bigger impact. The first computer program was written, it is said, by Ada Lovelace in 1842, for Babbage’s engine as it happens.

So, what have we been doing/inventing recently?

As has been suggested elsewhere, we are now into the 4thindustrial revolution; an era defined more by developments in communication and connectivity rather than by the invention of new technologies per se. It’s the innovative ways in which we apply these developments (applications of neural networks, blockchain or quantum computing etc.) to things like autonomous vehicles, social networks etc. that are driving progress.

Some are, obviously – although one might argue that more innovation is being demonstrated by newer companies (like Uber, Amazon, Google etc.) rather than the older, more established companies (e.g. the big banks). Certainly they have a way to go in our experience which is what prompted my colleague Andrew Simmonds to write this helpful piece.

I’d be interested in your views. Email me here.

Robert Baldock is the MD of Clustre, The Innovation Brokers and is celebrating his 50thyear as an innovator, this year!